Oceans of course, but also climate change, sustainable development goals, biodiversity or the future Treaty against plastic pollution: The SeaCleaners will participate in these international events physically or virtually.

The Our Ocean conference was created in 2014 on the initiative of former Secretary of State John Kerry, now the US President’s special envoy for climate and a great lover of the ocean.

This 8th edition is being held in Panama and the discussions will revolve around six areas of action: marine protected areas, sustainable blue economies, climate change, maritime security, sustainable fisheries and marine pollution.

The aim? To build partnerships between governments, industry, science and civil society and to mobilise the international community ever more widely on the subject of ocean protection.

The IPCC (Intergovernmental Panel on Climate Change) will publish its 6th Assessment Report including the contributions of its Working Groups I, II and III: The Physical Science Basis (August 2021), Impacts, Adaptation and Vulnerability (February 2022) and Mitigation of climate change (April 2022) as well as a synthesis report. It will also include the findings of the three special reports published during this assessment cycle: Global Warming of 1.5°C (October 2018), Climate Change and Land (August 2019) and Ocean and Cryosphere in a Changing Climate (September 2019).

The second session of the Intergovernmental Negotiating Committee (INC-2) to develop an international legally binding instrument on plastic pollution, including in the marine environment, will take place in Paris.

Three further INC negotiating sessions will take place between Paris in May and November 2024: in Nairobi, Montreal and a city in Korea to be determined. The diplomatic conference to adopt the Treaty and open it for signature is scheduled for 2025.

This summit on the Sustainable Development Goals (SDGs), to be held in New York as part of the UN General Assembly, will conduct a comprehensive review of the status of the 17 SDGs, address the impact of the multiple and interrelated crises facing the world, and provide political guidance towards the 2030 deadline for achieving the SDGs. The outcome of the summit will be a negotiated political declaration at the mid-point of the implementation of the 2030 Agenda for Sustainable Development.

➡️ Facing global challenges for the planet together

In parallel to the SDG Summit, UN Secretary General António Guterres will convene a Climate Ambition Summit to inspire “new, tangible and credible climate action” to “accelerate action at the mid-way point” of the SDGs. He now wants to push for a climate solidarity pact, so that all major emitters “make an extra effort” to reduce greenhouse gas emissions in line with the 1.5°C target and provide support to the most vulnerable.

The Secretary-General expressed his determination to make 2023 a year of peace and action, to advance the SDGs, tackle inequality and “deliver a liveable planet for our children and grandchildren.”

COP28, the 28th session of the Conference of the Parties to the UNFCCC will take place in Dubai, United Arab Emirates. It is the COP for the first global review of the implementation of the 2015 Paris Agreement.

COP15, the 15th Conference of the Parties to the Convention on Biological Diversity, was held in Montreal from 7 to 19 December 2022 under the Chinese Presidency. A historic agreement was reached on a global framework to preserve biodiversity. It includes the protection of 30% of the land and 30% of the sea by 2030. COP16 is scheduled to take place in Turkey in 2023, but the dates have yet to be set. 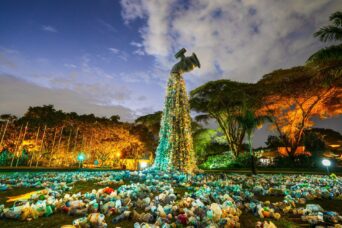 Facing global challenges for the planet together

What impact? The SeaCleaners and the Sustainable Development Goal #6 – clean water and sanitation