“Every time we go out to sea, we accidentally bring kilos and kilos of waste back to shore, but this time we were particularly well armed to pick it up,” laughs Luc Ramet, captain of the trawler Charles de Foucauld.

For 3 days, the teams of MANTA INNOVATION, THE SEACLEANERS’ integrated engineering office, (gently) “requisitioned” Luc’s fishing boat in Boulogne-sur-Mer to carry out the very first full-scale tests of the surface collection systems that will equip the MANTA.

The result: a new step successfully taken in the development of the MANTA! 3 days of intense work, rich in teachings, and a great deal of emotion for our collaborators and our partners involved in the adventure (as well as the beginning of an addiction to welsh!)

Successful trials all along the line

The surface collection systems are central to the mission of collecting floating macro-waste from the future marine pollution control ambassador boat. Hundreds of hours of study and development were devoted to their conception, design, hooking systems, floating and opening systems… in order to maximize their efficiency in collecting waste.

Eve Bourdon, project manager at MANTA INNOVATION explains: “One of the most important subjects that we absolutely wanted to validate in the field is the ratio of collection efficiency to environmental impact of the systems. Our obsession is that they should efficiently collect floating macro-waste while having the lowest possible drag. The challenge is simple: to ensure that MANTA will have minimal energy consumption in order to fulfill its promise to clean up the oceans, with a minimal amount of pollution in return.”

Drag simulations had been run on DynamiT software in the preceding months. But how would the collection systems react in real collection conditions?

After 3 days of testing at sea, in different configurations, the answer was clear: the drag of the collection systems filled with marine litter was even lower than the simulations. Hooray !

« These full-scale tests allowed us to validate the specifications of the collection systems and the forces applied to the poles, i.e. the large poles that extend to port and starboard to which they are attached,” continues Eve Bourdon. “It is thanks to this work at sea, in the field, that we can now dimension the MANTA’s outriggers, validate the protocol of use and precisely define the quantities and location of peripheral equipment such as winches, cleats, lengths of traction cables, weight and positioning of weights, etc.»

+ 43% increase in the MANTA’s collecting width

Because drag is low, the MANTA INNOVATION teams were able to validate a hypothesis they have been working on for several months: significantly increasing the length of the poles to increase the MANTA’s collection width.

The factory ship will thus be equipped with outriggers of more than 20 m each, instead of the 10 m initially planned, which increases the total collecting width from 46 to 66 m (+ 43%)!

Beyond the technical aspects, it is the merits of MANTA and its mission to protect the oceans that have been experienced by the entire team:

« When we came back up with our pockets full of waste, we were very moved to see for the first time in the water and in action one of the many technological bricks of MANTA, on which we have been working for months, even years, through calculations, computer simulations and tests in reduced size. We are finally touching the concrete expression of our commitment to this adventure. » Eve concludes.

In addition to verifying drag estimates, the trials on the Charles de Foucauld were also an opportunity to validate the effectiveness of the solutions developed by MANTA INNOVATION to equip its collection systems, particularly two crucial elements

The team also took the opportunity to practice deploying the systems, raising and emptying a full-size net, testing the quality of the protocols, and validating the volumes needed to store the waste.

2023: the year of the launch of a pre-production prototype

The tests on the Charles de Foucauld in 2022 were carried out with pairs of 15 m and 33 m wings, allowing the simulation of the MANTA’s central pocket and the two lateral pockets. Each pocket is capable of collecting up to 10 m3 of waste (about 3 tons of wet waste).

Further tests will be carried out during the year on a pre-production prototype equipped with smaller-mesh wings with a wider spacing to maximize the sliding of waste into the pocket and further increase the collection width. The goal: ever greater efficiency in capturing and retaining waste, with minimal drag for the MANTA.

In other words, 2023 will be the year when the MANTA technologies developed by MANTA INNOVATION become a reality.

To know about the MANTA surface collection systems 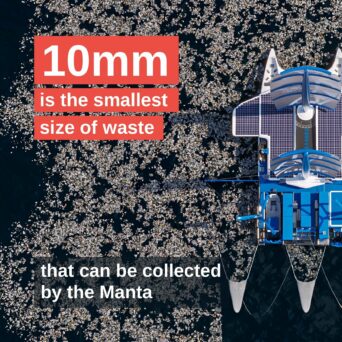 5 facts and figures to know about the Manta

“Approval in Principle” of the plastic-hunter ship The Manta: the giant of the seas fit for construction

Explore the Manta in 3D video