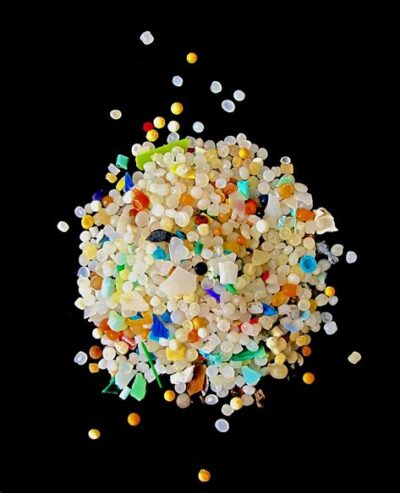 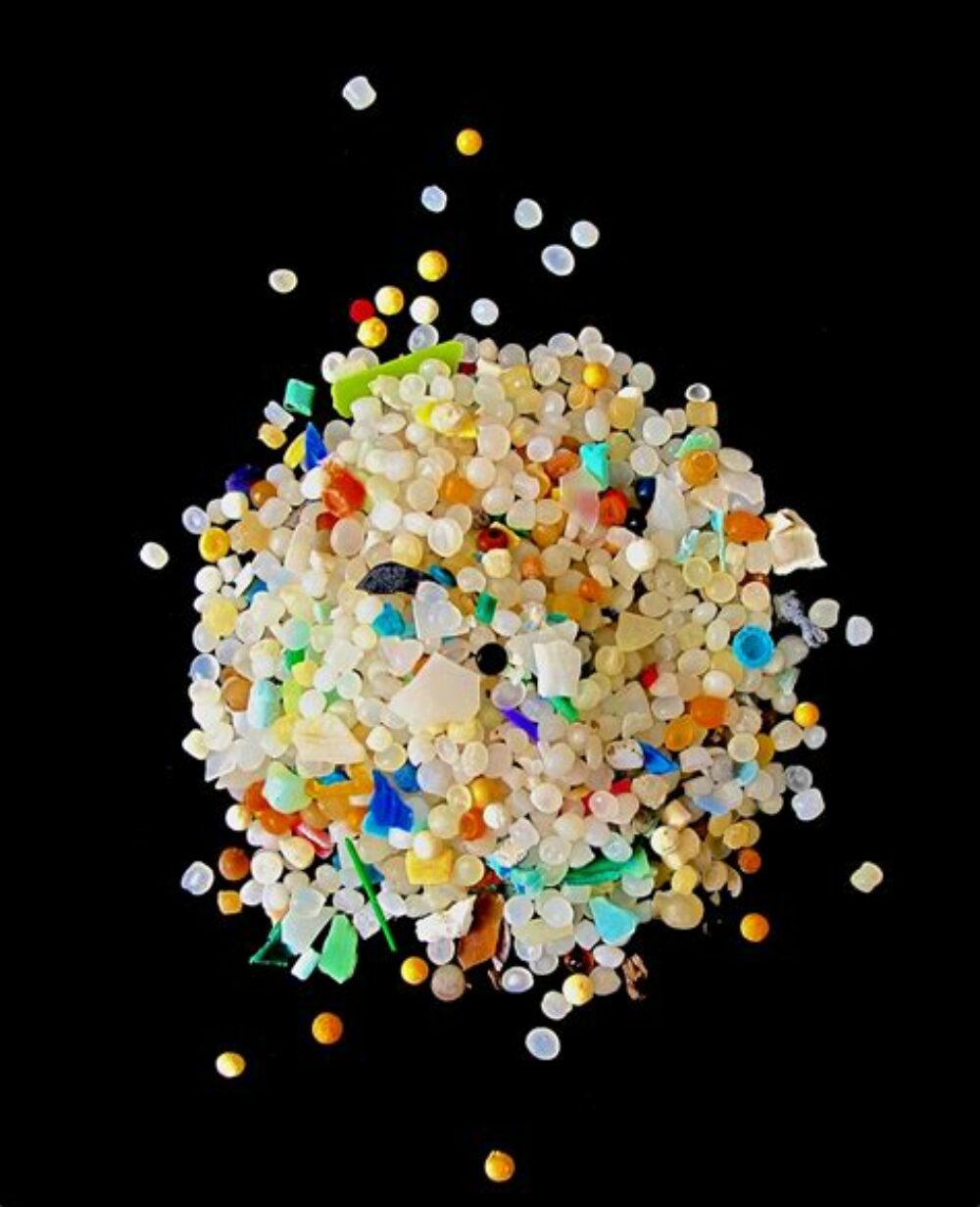 With increased plastic production, microplastics (MPs) dominate marine debris in numbers, and their impact on marine ecosystems is likely to increase in the future. However, there is still a lack of a global quantitative assessment of the risk associated with this pollution. The authors of this research conducted an ecological risk assessment of MP in the global ocean by comparing the thresholds of biological effects with the probability of exposure to these concentrations,  based  on available  data on the density of plastic debris. MP concentrations range from 100 to 5000 µm range from 0.0001 to 1.89  mg/L. The toxic threshold is 13.8  mg/L,  but the probability of exposure at this threshold is p = 0.00004. As a result,  MP in the oceans pose a negligible risk to ecosystems. However, the bioavailability, translocation and toxicity of MP increase as the size decreases, and the < 10 µm particles are not identified by current monitoring methods. Future research should target fractions of the lowest size of MP and nanoplastics. Moreover, the use of real particles from the environment is preferable  in toxicity tests than synthetic materials prepared in the laboratory.

The myths and realities about MicroPlastics (MP) are numerous.

It is difficult to get a clear and objective picture of the context, simply because it is an area under study and the preliminary results at the scientific level are just beginning to provide a basis for reflection for a global understanding. Pollution by plastic macrodebris was easy to understand by people, but MP is not because it concerns objects of very small size, even microscopic. At this scale, the number of particles reported means little and seems to us very huge. For example, this article indicates 7,000,000 MP in 1 m3 of seawater as one of the highest levels. This value seems huge but expressed in friendly units, it’s 7 MP/g of seawater. In comparison, the number of non-pathogenic bacteria accepted into a food is 100,000/g, five orders of magnitude higher! Their size is between 1 and 10 µm. At this scale numbers of particles are always huge but represent little matter, for example the 7,000,000 MP corresponds to about 2 g. To get huge weight values you just have to multiply by the volume of the oceans and you actually get tons. Beyond the figures that are still being debated, there is a real question about the risks associated with this pollution. Potential risks are identified, but we are only at the beginning of the studies on their validation in relation to the level of exposure.

What is a microplastic (MP)?

The term microplastic (MP) applies to small particles of plastic materials ranging in size from 5 mm to 1 µm. Below 1 µm we are talking about nanoplastics (NP). MP that are produced voluntarily for certain abrasive applications, for example in cosmetics for exfoliants, are called primary MPs. The others resulting from the degradation of larger plastic debris are called secondary MP. The chemical families of these materials are very varied: PE, PET, PVC, PP… to name the most well-known. Similarly, their composition is very variable depending on the application in agri-food, building … with additives that can be very different for the same polymer.

MP are observed in all oceans.

The authors of this study compiled a large number of published data on observations of MP in the oceans. Statistical synthesis shows that MP are found in all oceans at concentrations almost equivalent from 0.16 and 0.18 µg/L. This underlines the global dimension of this pollution. Only confluence areas, such as ocean gyres and areas close to the coasts and major rivers, have higher levels from 0.8 and 2 µg/L. As particles are small, their number is very high, up to 7 million/m3. These data converted into surface units are equivalent to a maximum of 500 mg/km2 in the accumulation zones and 50 mg/km2 in the others. The size range of the MP is very wide, from 1 µm to 5000 µm. However, in the marine environment the most common size is greater than 300 µm.

The term “potential risk” is important to understand. We are here in the legitimate precautionary principle when new pollution is highlighted. First one is the chemical risk associated with additives and their spread in the natural environment or in organisms that have ingested MP. A variant of this risk is the adsorption of environmental pollutants (heavy metals, pesticides …) on MP, making them more concentrated and dangerous if ingested. There is also the biological risk when pathogenic microorganisms attach to MP and are transported far from their emission point. Finally, the plastic particles themselves can be physically toxic to the organisms ingesting them. This is the phenomenon of translocation where a very small particle is integrated into the cells and then circulates in the body expressing its toxicity. Once all these potential risks are listed, it is necessary to quantify thresholds, validate toxic effects and assess the probability of exposure.

This first synthesis of current MP data shows that they would pose a negligible risk to marine ecosystems.

The toxicity of plastic particles depends on their size. Whatever the toxicity analysis, this study shows a significant correlation between size and toxicity. The 1 µm particles are the most toxic and the large MP are the least toxic. The other two classes, 10 to 100 m and 10 m, have intermediate toxicities. Large MP have a toxicity threshold of 13.8 mg/L. This concentration has never been observed in the oceans. The highest observed concentration is an order of magnitude below (1.8 mg/L). Large MP present in the ocean therefore present very little risk, an assertion with a confidence level of 99.996% according to these data. Small MP between 10 and 100 µm have an environmental frequency of 0.023% compared to total MPs. Their level of risk is therefore very low. Only NP have higher toxicity potential due to the cellular translocation mechanism, but currently there is very little data, as collection protocols filter MP down to 10 µm, the fraction below is not collected. The existence of NPs in the environment is even the subject of debate, as these particles tend to aggregate spontaneously to form MPs. The translocation threshold is also a matter of debate. It is estimated to be 0.024 µm in mussels and 0.150 µm in scallops. The type of polymer can also vary the level of toxicity, for example PEG is used as NP in some vaccines. It is therefore, a-priori, non-toxic.

The importance of one of the mechanisms of toxicity of MP in marine ecosystems get a first validation.

In the laboratory, the toxic effects of MP are significant for sizes below 10 µm. The majority of MPs in the oceans are above 300 µm in size. This summarizes current knowledge of proven risks. It does not take into account the effects of chemical pollution nor pathogens. This conclusion is only applicable to the oceans. It is not transferable to aquatic or terrestrial environments, nor to airborne MP. As the authors of the study pointed out. We lack data for a complete view of the problem. This finding also indicates the futility of MP collection in the marine environment. Ecosystem gain would be zero with a significant potential impact on plankton and microfauna that are the basis of marine food chains. This is not the case with the collection of floating plastic macrodebris that have a direct impact on wildlife and economic activity. Their lifetime at the surface of the oceans is relatively short, then the majority sediments to the bottom where they are impossible to collect. It is therefore a priority and urgent to collect them as close as possible to their source when they flow into the oceans.