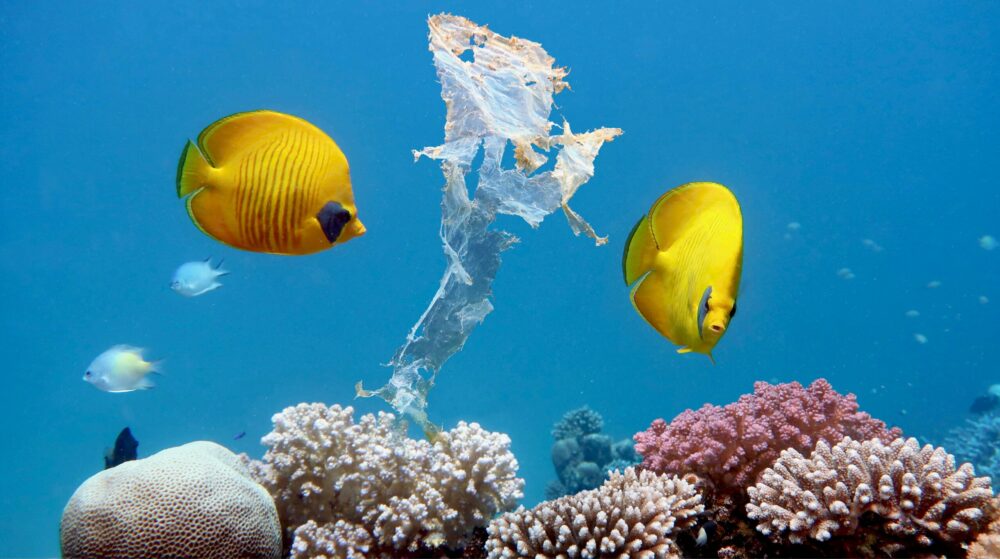 […] This assessment describes the far-reaching impacts of plastics in our oceans and across the planet. Plastics are a marker of the current geological era, the Anthropocene (Zalasiewicz et al. 2016). They have given their name to a new microbial habitat known as the plastisphere (Amaral-Zettler et al. 2020). Increased awareness of the negative impacts of microplastics on marine ecosystems and human health has led them to be referred to as a type of “Ocean PM2.5” akin to air pollution (i.e. particulate matter less than 2.5 micrometres [μm] in diameter) (Shu 2018). With cumulative global production of primary plastic between 1950 and 2017 estimated at 9,200 million metric tons and forecast to reach 34 billion metric tons by 2050 (Geyer 2020), the most urgent issues now to be addressed are how to reduce the volume of uncontrolled or mismanaged waste streams going into the oceans (Andrades et al. 2018) and how to increase the level of recycling. Of the 7 billion tons of plastic waste generated globally so far, less than 10 per cent has been recycled (Geyer 2020). […]

The United Nations Environmental Program just published the report “From pollution to solution – A Global Assessment of Marine Litter and Plastic Pollution”. The SeaCleaners, ahead of its roundtable “An Abyss of Plastic Wisdom, A Solutions-Oriented Dialogue”, part of the UN Decade Laboratory “A Clean Ocean”, is looking at three topics of interest for our community. This one is the second of the series. The entire series will be based on the latest UNEP assessment report as the last repository of plastic wisdom worldwide.

In the first SeaView of the series (Nov.4, 2021) we examined where the ocean plastics come from and why it is difficult to know exactly how much is found floating, sinking or degraded into microplastics. But speaking of microplastics what do we mean when we talk about Macro- Micro- Nano- plastics?

The UNEP assessment report reminds us of a few definitions that we should always remember when we talk about marine debris.

Indeed, the report defines “marine debris may result from activities on land or at sea [and includes] any anthropogenic, manufactured, or processed solid material (regardless of size) discarded, disposed of, or abandoned that ends up in the marine environment (plastics, metals, glass, concrete and other construction materials, paper and cardboard, polystyrene, rubber, rope, textiles, etc.). Moreover, marine debris can happen as a consequence of a natural disaster and transported thousands of miles away from where it originated, such as the 2011 Tsunami in Japan that “washed about 5 million metric tons of debris into the ocean within hours (Japan Ministry of the Environment 2012)”.

It is estimated that 80% of all marine debris come from plastic waste (IUCN).

It does but there is no convention on sizes that can be used universally. Whereas what you define as microplastics are pieces of plastics from 50-500 μm, per Andrady, 2011 or pieces that are smaller than 5 mm, as defined by Lusher et al. in 2017, is your convention to choose.

The report chose the proposed categorization from Lusher et al. As such the categories in this study are:

The SeaCleaners also adopted to follow Lusher et al. as a guidance.

Lusher et al. also went further and defined the shapes of the plastic debris, which can be useful for classification and identification in the field:

Virgin, recycled, primary, secondary plastics: what are we talking about here?

Plastics are “synthetic organic polymers with thermo-plastics or thermo-set properties (synthesized from hydrocarbon or biomass raw materials), elastomers (e.g. butyl rubber), material fibres, monofilament lines, coatings and ropes (GESAMP 2019). Many plastics are produced as a mixture of different polymers and various plasticizers, colorants, stabilizers and other additives. Most plastics can be divided into two main categories: thermoplastics (capable of being deformed by heating), which include polyethylene, polypropylene and polystyrene; and thermoset (nondeformable), which include polyurethane, paints and epoxy resins”.

Some plastics are qualified as “virgin”, meaning created from raw material, as opposed to recycled, which contain a part of virgin plastics that has already been used before in either the same type of objects or something completely different. For example, more and more plastics fibers for clothing are made from recycled PET.

The microplastics qualified as secondary come from the degradation of larger pieces, either from breaking down while being used or through degradation in the environment, as the report states.

All nanoplastics at this time are secondary, meaning that they have been degraded from microplastics (either primary or secondary themselves).

Finally, the concept of degradation in plastics is the process of their material breaking down due to several constraints. The most common is the effect of UV radiation (photodegradation) that makes the plastics brittle and as a result the plastics fragment. In the end, if there’s complete breakdown, plastics is degraded in CO2, water, methane, hydrogen, etc. when complete breakdown occurs. Photodegradation is made more difficult due to the liquid environment the marine plastics found itself in, but other phenomena can occur, and the breakdown can happen due to mechanical processes (waves). Bacteria can also degrade plastics and this mechanism is usually slow and referred to as biodegradation. Recently, a study demonstrated that other organisms (krills) could degrade micro plastics after ingestion and digestion into nanoplastics (Dawson et al. 2018).

So why is the degradation of macroplastics to micro and nano is such a big deal? Out of sight, out of mind?

A number of issues come from the fact that macroplastics degrade into smaller and smaller pieces.

First, is the release of toxins into the environment. As mentioned above, most plastics are composed of a mixture of various plasticizers, colorants, stabilizers and other additives, but composition is often not known. Those additives are the culprit in the release of toxins into the environment as a result of the own degradation or fragmentation of the plastics. Scientists and some practitioners (waste management professionals) are asking manufacturers to label the plastics and make all components known so their study throughout plastic life cycle and break down are made possible and standards are set. It would also deeply help waste management efficiency as the product entering the management chain is often not known, which leads to many challenges for proper disposal. Same issue with “biodegradable plastics” where much is not known, due to a lack of firm regulation on what is biodegradable when we talk about plastics. Citizens misconceive biodegradable for something that degrades into the environment without dire consequences, except that it is far from the truth! Not to mention that usually this biodegradability is not tested in marine environment, adding to the complexity. Same issue goes with recycled material as little is known on the actual composition of virgin or recycled material. We make everything even more complex by reusing the plastics recovered in the environment, without knowledge of their level of degradation, and by renaming them “ocean plastic” or “marine plastic” or “ocean-bound plastic” or even “beach plastic” for marketing purposes (see our video “Beyond Marketing Terms” to learn more).

OK, so what are the effects on the biodiversity?

We have all seen those horrible images where turtles or sea lions and other marine wildlife get entangled in ghost nests, die of starvation their bellies full of plastic debris. But more studies need to be done to truly understand the extent of the interactions and consequences of wildlife and plastic pollution in the marine ecosystems. Macroplastics affect the balance of fragile ecosystems like mangroves which are major CO2 sequestration systems. The effect of macroplastics seems like an obvious one. We see it, the effect on wildlife is compelling. Problems are adding up with microplastics, but we don’t see it. Like macroplastics, microplastics interact with other type of life forms, the plankton. Also called primary producers, they are faced with an increasing problem as the presence of microplastics in the ocean rises (concentration higher than thought in the past). Zooplankton ingests microplastics but the effect is not well known. However, the problem becomes more concerning as we move up the food chain, with high concentrations among predatory species (salmon, etc.).

So, what about our health, us humans?

More studies are also needed in this field to understand the entire phenomena of our ingestion of plastics, through our food (mainly seafood), or even breathing it as microplastics are found in the atmosphere, or through our drinks (water, beer, etc.). Studies have shown that microplastics can be transferred up into the food web, and they also have demonstrated that micro- and nano- plastics are also known to concentrate toxins on their surface as well as bacteria or virus (hence the term plastisphere as it forms a new ecosystem). However, most of the studies are done in laboratory settings. In field conditions it is much more difficult to quantify and characterize micro- and nano- plastics. What is true in one setting might not be in another. Finally, the studies of the effect of plastics are a new field and as many nascent research, we lack standardized methods to detect, quantify and characterize plastics due to their level of degradation, their shapes and sizes, as well as colors, which can change due to level of degradation from original component. All of these factors tend to work against our understanding on how the materials interact with our health.

What is clear is that an urgent call for more attention and studies on the issue of marine plastics waste in the ocean is needed, especially on the effects on the food chain from micro- and nano- plastics, because the consequences are still unknown and can turn out to be disastrous.

Starting next year, The SeaCleaners will support collaborative research on macro- and micro- plastics in waterways and along the coasts of Indonesia. While the MOBULA 8 and its crew will start rehabilitating a site in Bali, microplastics will be collected and the data from the characterization of the plastics collected will contribute to the scientific knowledge of local teams and science. We hope that this collaborative effort will support local governments in policy decision-making as well as a better understanding of the specificity of that site for awareness raising purposes.

Stay tuned for next SeaView and log in to our round table on Nov 19!