Not all equal in front of plastic pollution

According to the latest UN reports, plastic pollution has become one of the three main environmental scourges of our century, with consequences that are as catastrophic as they are persistent for all the planet’s ecosystems. Fauna and flora are the first victims of this human invention whose end-of-life management remains unsatisfactory. Worse still, the current dynamics of overproduction and overconsumption is turning against its creator: the repercussions of this pollution on human beings are also dramatic.

We are not all equal in the eyes of plastic pollution: its social and economic consequences increase the inequalities between individuals and communities, to the point that more and more governmental and non-governmental actors are placing the issue of the fight against plastic pollution on the terrain of social justice and the defense of human rights.

In this regard, an explosive report by the United Nations Environment Programme (UNEP) and the NGO Azul dated 2021 (“Neglected: Environmental Justice Impacts of Plastic Pollution“) shows unequivocally that plastic pollution disproportionately affects marginalized communities and those living near plastic waste production and processing sites. It reminds us of this essential, yet all too often forgotten, fact: the right to a clean, healthy and sustainable environment was elevated in 2021 to the status of a fundamental human right by the United Nations Human Rights Council.

Here is a non-exhaustive review of the main inequalities found in plastic pollution.

Today, 80% of plastic waste is discharged into the oceans through some thousand rivers. More than 2 billion people are at risk of having reduced access to freshwater resources in the coming years, and plastic pollution is partly responsible for this threat. Deterioration of freshwater quality in the most vulnerable regions, contamination of soils and water sources used for agriculture and fishing, obstruction of water supply systems, development of infectious diseases: water contaminated by plastic waste is a real threat for populations.

Plastics are indeed real “sponges” for viruses and bacteria, and can even serve as growth media and means of transport for pathogens. For example, various bacterial species such as Vibrio tend to attach themselves to floating microplastics causing serious infections in humans and animals, the most serious of which is cholera.

In addition, there is a direct link between plastic debris and the risk of infectious diseases. Every piece of plastic that contains water is a potential breeding ground for insects, including mosquitoes that can transmit diseases such as malaria, Zika, or dengue. This is a major problem, especially in the slums of tropical areas.

The invasion of aquatic and terrestrial environments by plastic waste has had devastating economic consequences.

Plastic pollution has infiltrated our world, contaminating the air we breathe, the water we drink and the food we eat. According to the latest studies, an adult absorbs up to 121,000 microparticles of plastic per year by inhalation or ingestion! This invasion has consequences on human health, exacerbating the inequalities already present in our society. Some people are more vulnerable to this pollution:

“Where there are social inequalities, there are also environmental and health disparities and vice versa.”

It is well known: when you don’t see the problem, it means there is none. It is on this mantra that some countries, big consumers and producers of plastic, did not hesitate to send their plastic waste to the other side of the world. This is the case of the United States, Canada, Australia and Europe, which, before 2018, massively exported their waste to underdeveloped countries such as China, Vietnam, Bangladesh and Indonesia.

However, this has resulted in disastrous consequences for the environment, the economy and the health of local people. In 2018, China finally said STOP. It closed its doors to waste imports due to the overload and poor quality of waste it was receiving. The global waste management market was disrupted for the first time: developed countries were forced to review their own waste management.

Unfortunately, waste management remains a major issue in the inequities caused by plastics. Some regions of the world are still plagued by open dumps that are gaining ground. Marginalized communities living near plastic waste production and processing sites are the first victims in this giant, badly needed management system.

Ocean pollution by plastic waste therefore undermines the achievement of several of the 17 Sustainable Development Goals (SDGs) defined by the United Nations for a more just and inclusive world. It is crucial to take these inequalities into account when developing policies and programs to combat the scourge of plastic pollution, which is endangering our planet and its inhabitants. 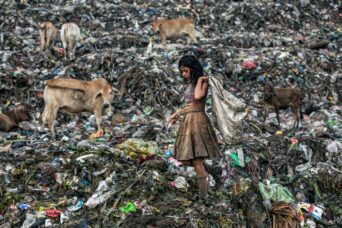 What impact? The SeaCleaners and the Sustainable Development Goal #6 – clean water and sanitation

Facing global challenges for the planet together