Plastics! But just how much of it and where does it come from? 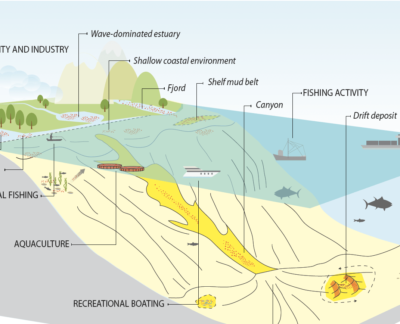 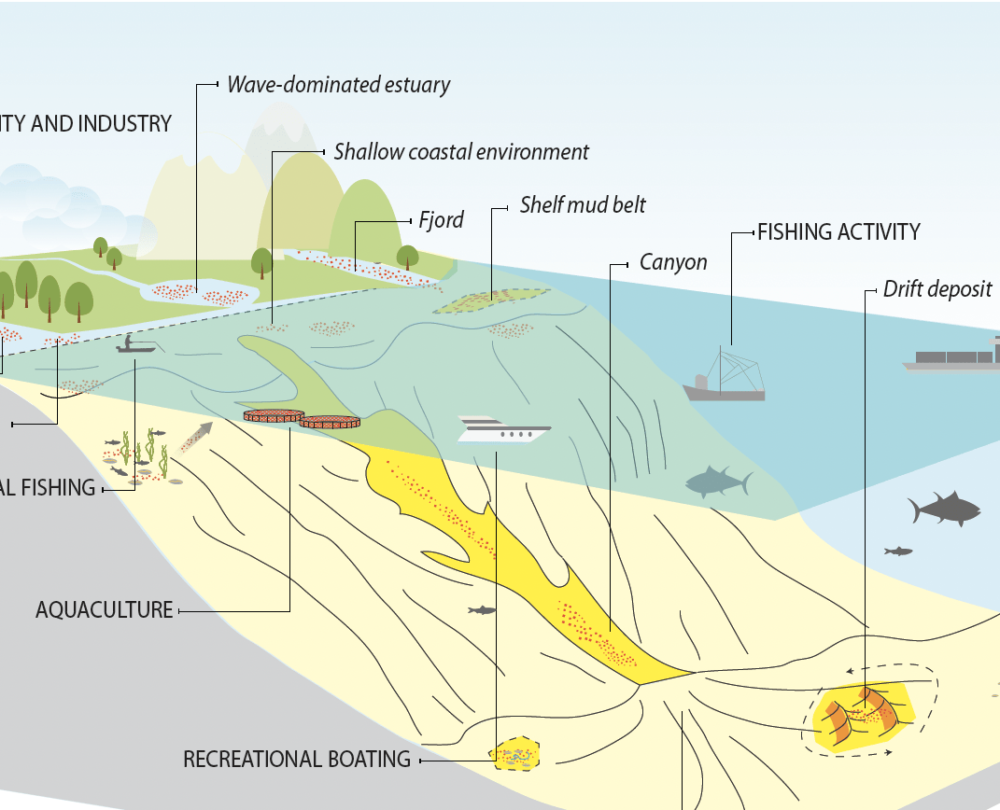 […]This assessment describes the far-reaching impacts of plastics in our oceans and across the planet. Plastics are a marker of the current geological era, the Anthropocene (Zalasiewicz et al. 2016). They have given their name to a new microbial habitat known as the plastisphere (Amaral-Zettler et al. 2020; see Glossary). Increased awareness of the negative impacts of microplastics on marine ecosystems and human health has led them to be referred to as a type of “Ocean PM2.5” akin to air pollution (i.e. particulate matter less than 2.5 micrometres [μm] in diameter) (Shu 2018). With cumulative global production of primary plastic between 1950 and 2017 estimated at 9,200 million metric tons and forecast to reach 34 billion metric tons by 2050 (Geyer 2020), the most urgent issues now to be addressed are how to reduce the volume of uncontrolled or mismanaged waste streams going into the oceans (Andrades et al. 2018) and how to increase the level of recycling. Of the 7 billion tons of plastic waste generated globally so far, less than 10 per cent has been recycled (Geyer 2020). […]

The United Nations Environmental Program just published the report “From pollution to solution – A Global Assessment of Marine Litter and Plastic Pollution”. The SeaCleaners, ahead of its round table “An Abyss of Plastic Wisdom, A Solutions-Oriented Dialogue”, part of the UN Decade Laboratory “A Clean Ocean”, is looking at three topics of interest for our community, and this one is the first of the series. The entire series will be based on the latest UNEP assessment report as the last repository of plastic wisdom worldwide.

The interactive presentation of the assessment report states it boldly but necessarily:
Without urgent action, the estimated 11 million metric tons of plastic currently entering the ocean annually will triple in the next twenty years.
This would mean between 23 and 37 million metric tons of plastic flowing into the ocean every year by 2040.
That is equivalent to 50 kilograms of plastics per metre of coastline worldwide.

But where does this plastic come from and how do we estimate the share volume that reaches the ocean? The sources of plastics are clear and well-illustrated in the following figure: 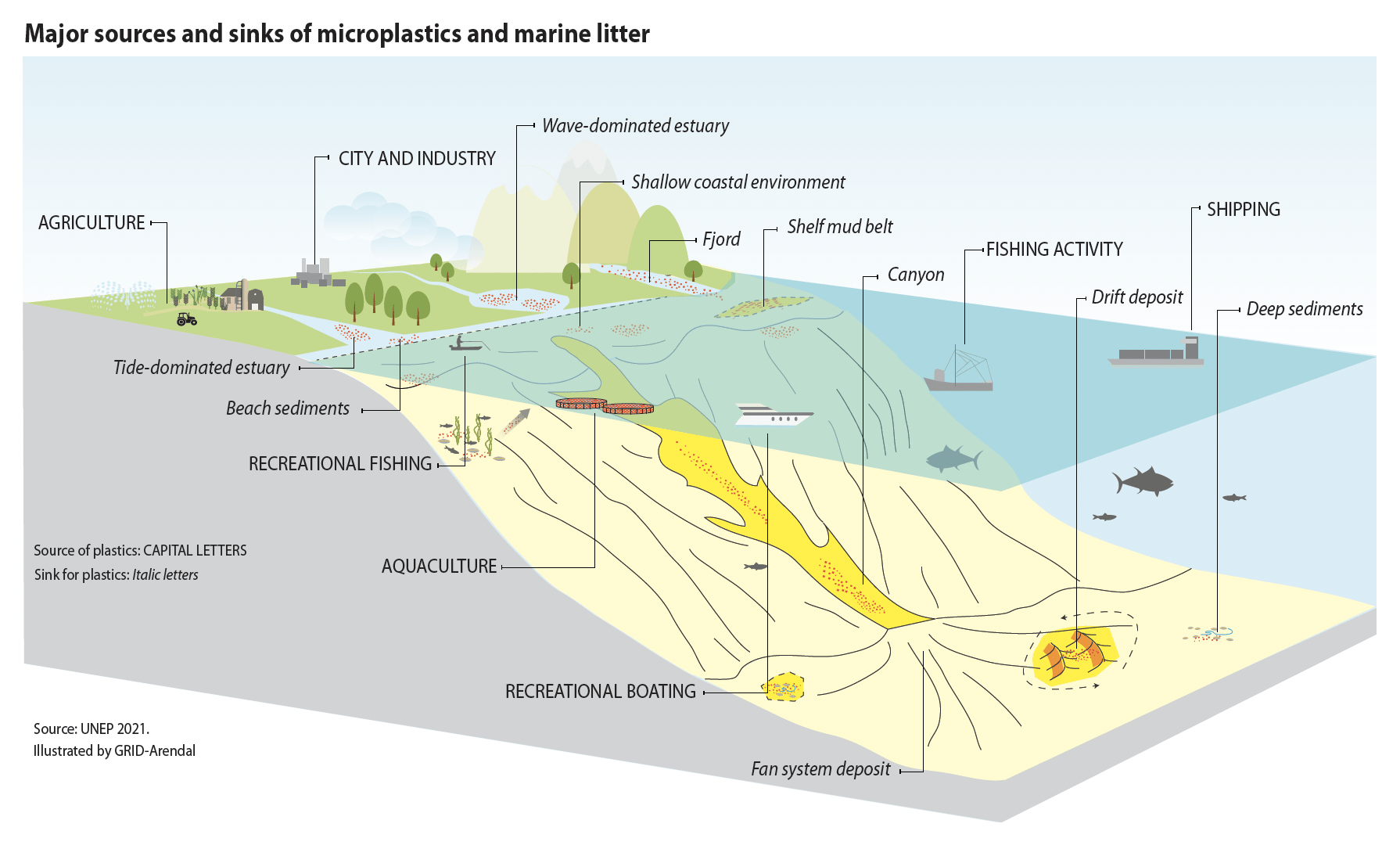 Plastics have been found from Mont Everest to the Marianne Trench, in ice, freshwater, lakes, rivers, oceans and air (macro plastics, microplastic, and nano plastics).

All plastics are first produced on land in various forms for our consumption and ways of life. A significant part of the plastic produced becomes mismanaged and ends up accumulating on land and at sea. The mismanaged quantity then becomes labelled as land-based and sea-based waste sources (from the location they were dumped). As the plastic production continues to grow, unfortunately the mismanaged part does too. Its accumulation from the 1950s is what is hard to quantify and understand due to the highly complex systems in which the plastics are found.

Why is it so difficult to have a more precise number?

First, it is difficult to understand the pathways and actual leakage of the mismanaged plastics into the oceans. Second, the protocols with which the waste is measured are often not consistent from one study to the other and a standardized method of characterization needs to be decided within the scientific community as well as how the reporting of those measurements is published so studies can be compared. In the table below (table 1 from the UNEP report), most of the analysis comes from modelling, with different sets of parameters, in very complex dynamic environments. The parameters used in the models are described in the column “approach used”, which in the end determines the estimated emissions of plastic waste (first column), all considering land-based sources (second column), which in the end determines what the projected emissions of plastic waste are (third column). This table shows how legitimate but different approaches allows for different outcomes. Each method advances the understanding of the plastic waste system and can explain how it reacts to different sets of parameters and models. Ultimately, by looking at the numbers, data inputs, observation results and actual measurements, models can be fine tuned so predictions can be relied on. 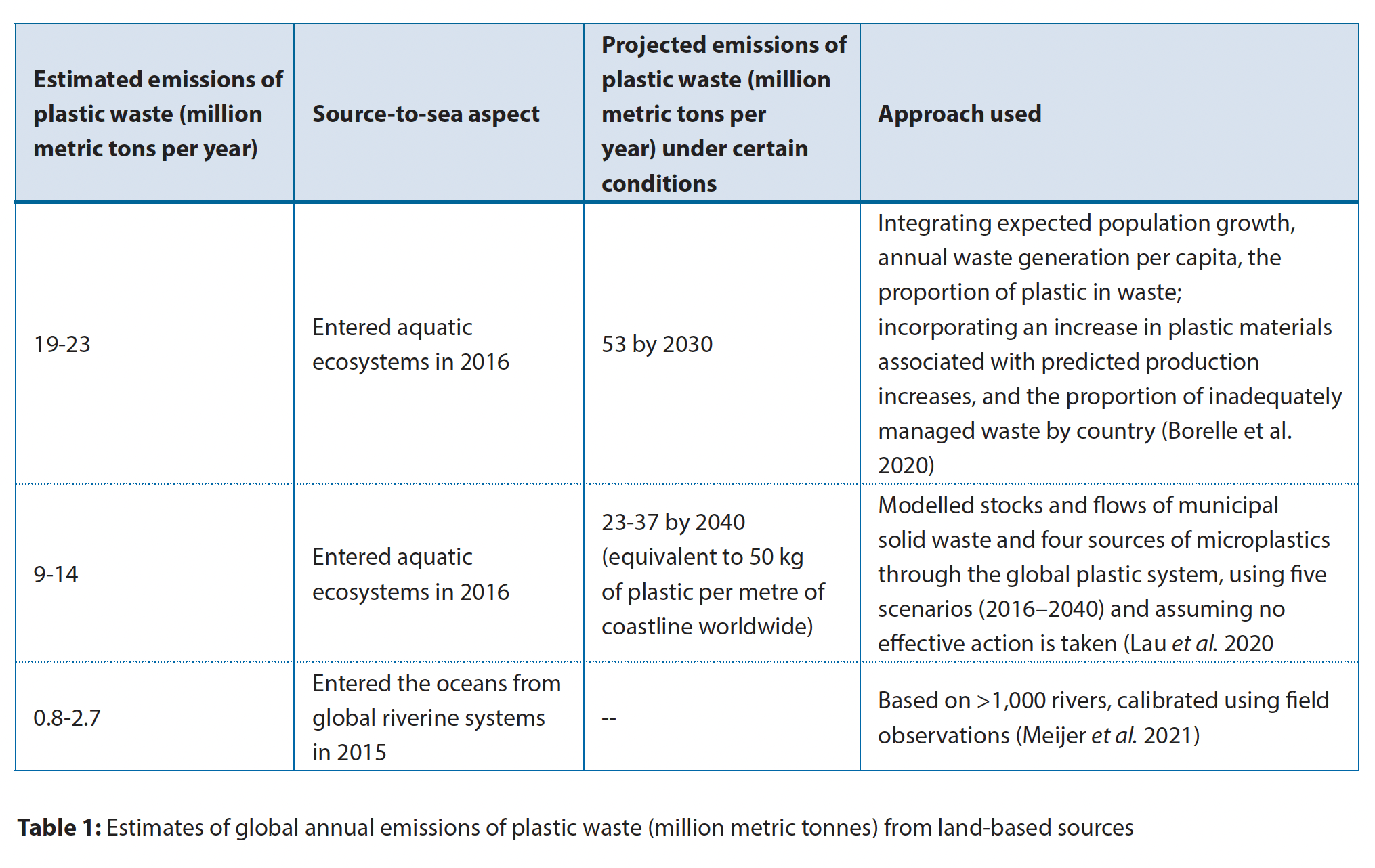 The problem of assessing the actual quantity of oceanic plastic waste is increased when we consider not only macro-plastic but also microplastic entering the ocean. Their sources are different, their pathways as well, and some of the microplastic results from breakdown of bigger pieces therefore once considered macro-plastics (also called secondary microplastics).

According to the report, there are four main pathways for macro-plastics (The Pew Charitable Trusts and SYSTEMIQ 2020):

For microplastics, the report states that primary microplastics may come directly from facilities through leakages or during transport (accidents), while secondary ones apart from breaking down from bigger pieces, may come from landfills leachates, biosludge from wastewater treatment plants, and agricultural run-off (Mason et al. 2016; Mahon et al. 2017; Li et al. 2018; Cowger et al. 2019; He et al. 2019; Sun et al. 2019)

However, the assessment report finding #6 states that: the main sources of marine litter and plastic pollution are land-based (as opposed to sea activities), and UNEP estimates that 80% of the marine litter originates from land sources. We ought to first better control the land-based pathways first.

According to the current report, three-quarters of the 7,000 million tons cumulative plastic produced have become waste between the 50s and 2017. It means that 5,250 million tons have been discarded and placed in landfills. This huge quantity of waste became part of uncontrolled and mismanaged waste streams, or was dumped or abandoned in the environment, including at sea. The issue is that global production is estimated to grow and reach 11,000 million metric tons per year by 2050 if we continue business as usual (Geyer 2020).

Beyond its origin, why is it so important to know this fraction of lost waste and particularly the one that is dumped or abandoned in the environment?

As we investigated characterization of the plastic waste found in an Indonesian village in our last SeaView, assessing sources and pathways of the mismanaged and improperly discarded waste helped with mitigation of the issue by placing bins where they were lacking, raising awareness among the villagers, or understand sources of the waste.

For solutions-based NGOs such as The SeaCleaners, it is of the utmost importance that we know where the plastic patches are. Thanks to a combination of on-site observations, satellite observations, estimations and predictions of the possible drifts of the observed patches from models, we can find out where our maritime waste collection boats need to operate in order to rehabilitate as many ecosystems as possible in the most efficient way.

Because that’s really what this is all about: we have a problem, we know the problem is important even if the estimation varies from one study to the next, the problem remains enormous. We know, even if not fully, that the issue affects wildlife, both animals and plants… And maybe more importantly, it impacts cruelly the primary oxygen producer and carbon sink that the ocean is, on which we depend.

Research shows that the issue is pervasive and a time bomb. As our way of life and industrial flow continue to produce and demand more plastics, more waste is created, affecting our ecosystems.

To be able to effectively tackle an issue we need to understand it. While research is still pinning down exact numbers, the results even if imperfect are here and can be used as evidence for policy makers to place regulations regionally, nationally and of course also globally as the issue affects us all once it affects the oceans and our air. Grassroots actions can also take place thanks to the published research as the public takes in the enormous efforts needed and demands that industries and policy makers act now to prevent the marine pollution from happening so the health of our ecosystems can slowly be restored.